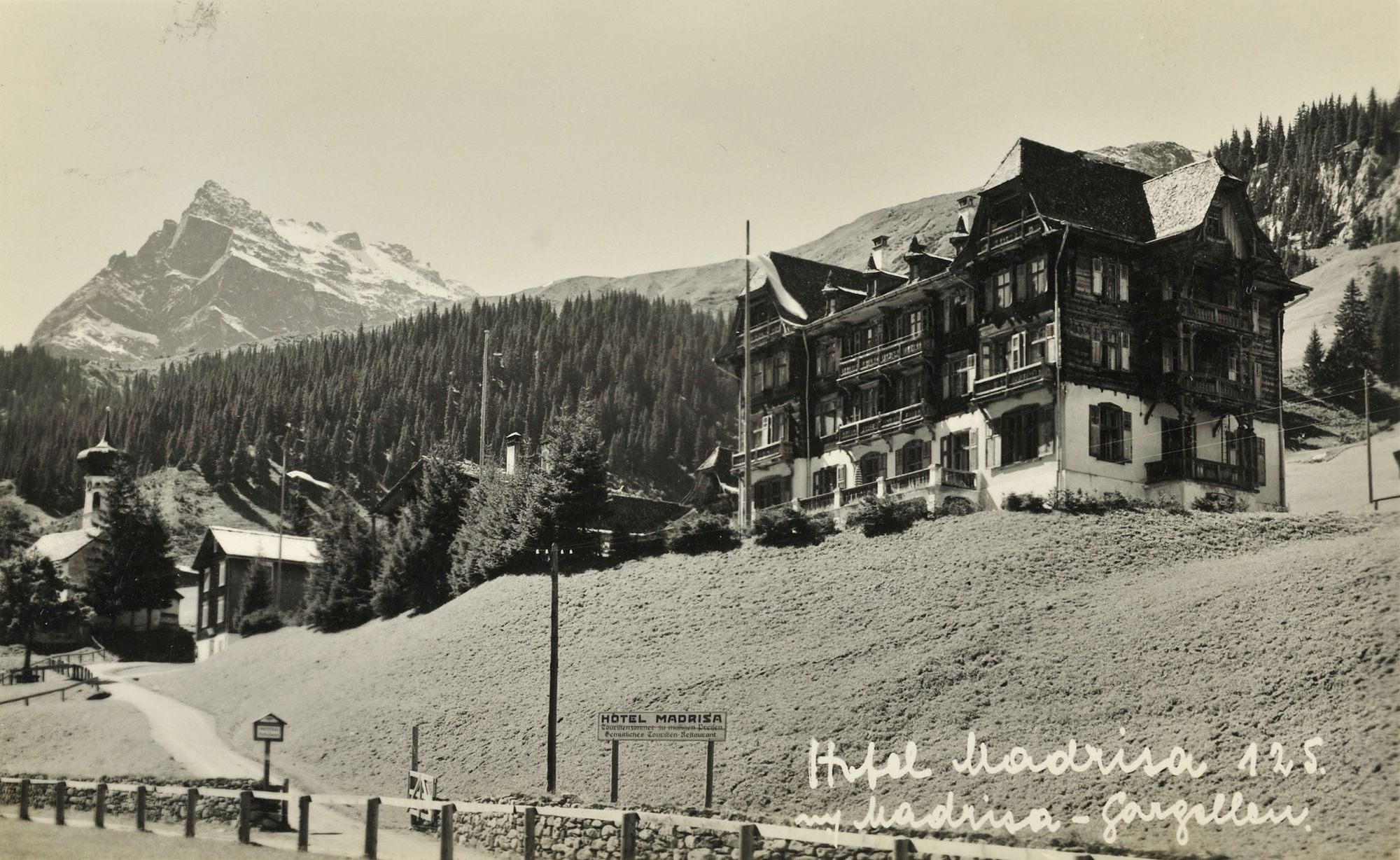 A house of tradition filled with stories

FROM TAVERN “RÖSSLI” TO HOTEL MADRISA

Originally, the hotel used to be a small tavern for traders and travellers passing by on a bridle track. Records show that the so-called “Rössli” was the first tavern in Gargellen. Local historian Ludwig Vallaster mentioned Johann Josef Bahl as the first host coming from an old Montafon lineage. Franz Xaver Schwarzhans, known as a “friend of France” from Schruns, later on bought the house and built the first “proper” hotel in Gargellen with 50 beds. He named it after the summit that visibly dominates the valley: Hotel Madrisa. 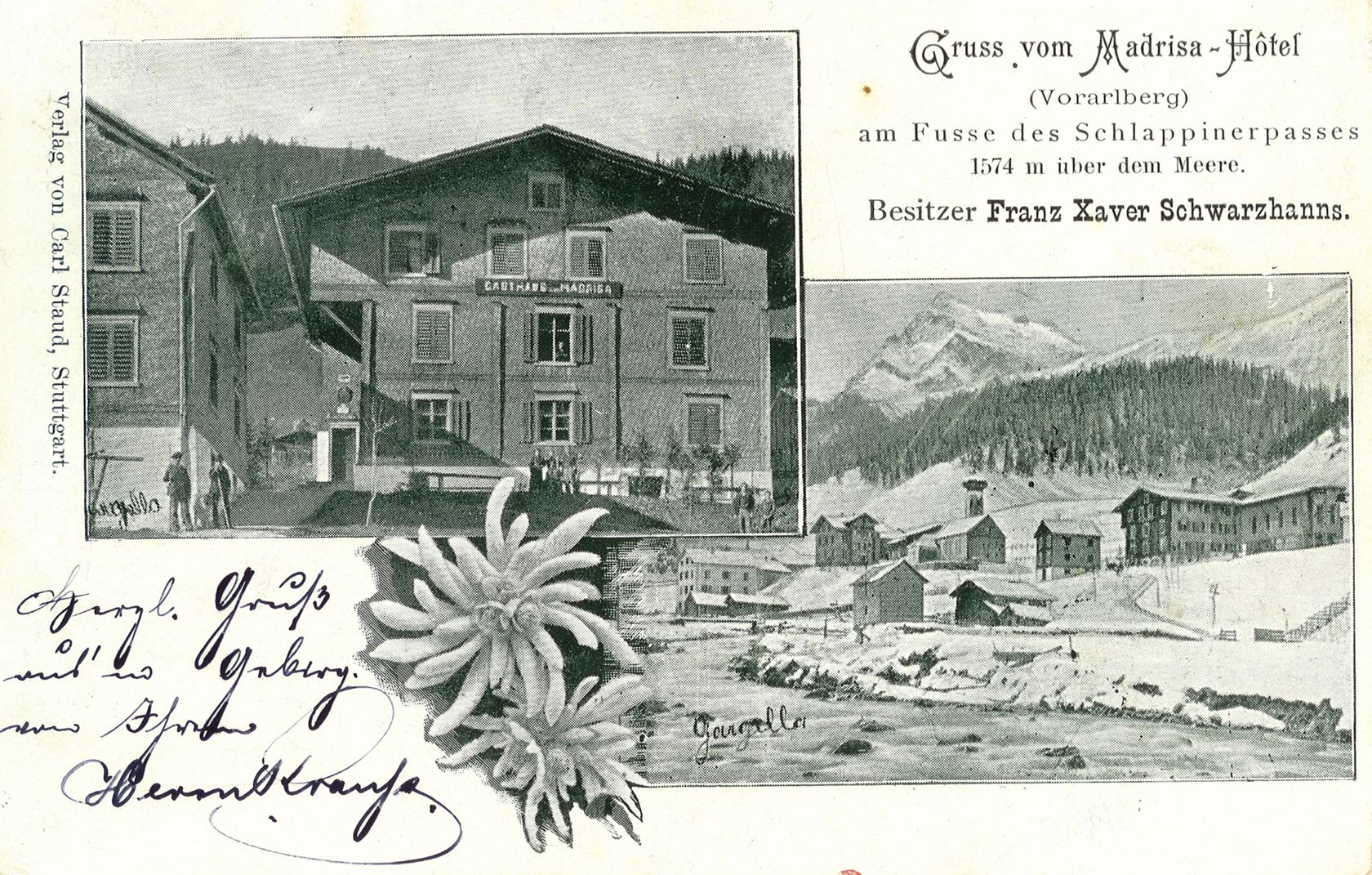 The hotel was bought by a consortium and the building was notably enlarged. Based on the plans by architect Willibald Braun from Bregenz, a four-storied, artfully decorated wooden house with an elegant dining room was added to the house, as well as an electricity plant. The new Art Nouveau styled wing was considered a landmark of Gargellen – even back then. Its great room height was based on the vision of its builder. In 1889, the director of the meteorological centre in Vienna reported on the advantages of Gargellen as a high-altitude spa town. Soon after, recreational holidays in Gargellen were in vogue. Illustrious guests such as industrialists, scholars, artists and others met and assembled in Hotel Madrisa. Sigmund Freud, Peggy Guggenheim and Arthur Schnitzler were among them. 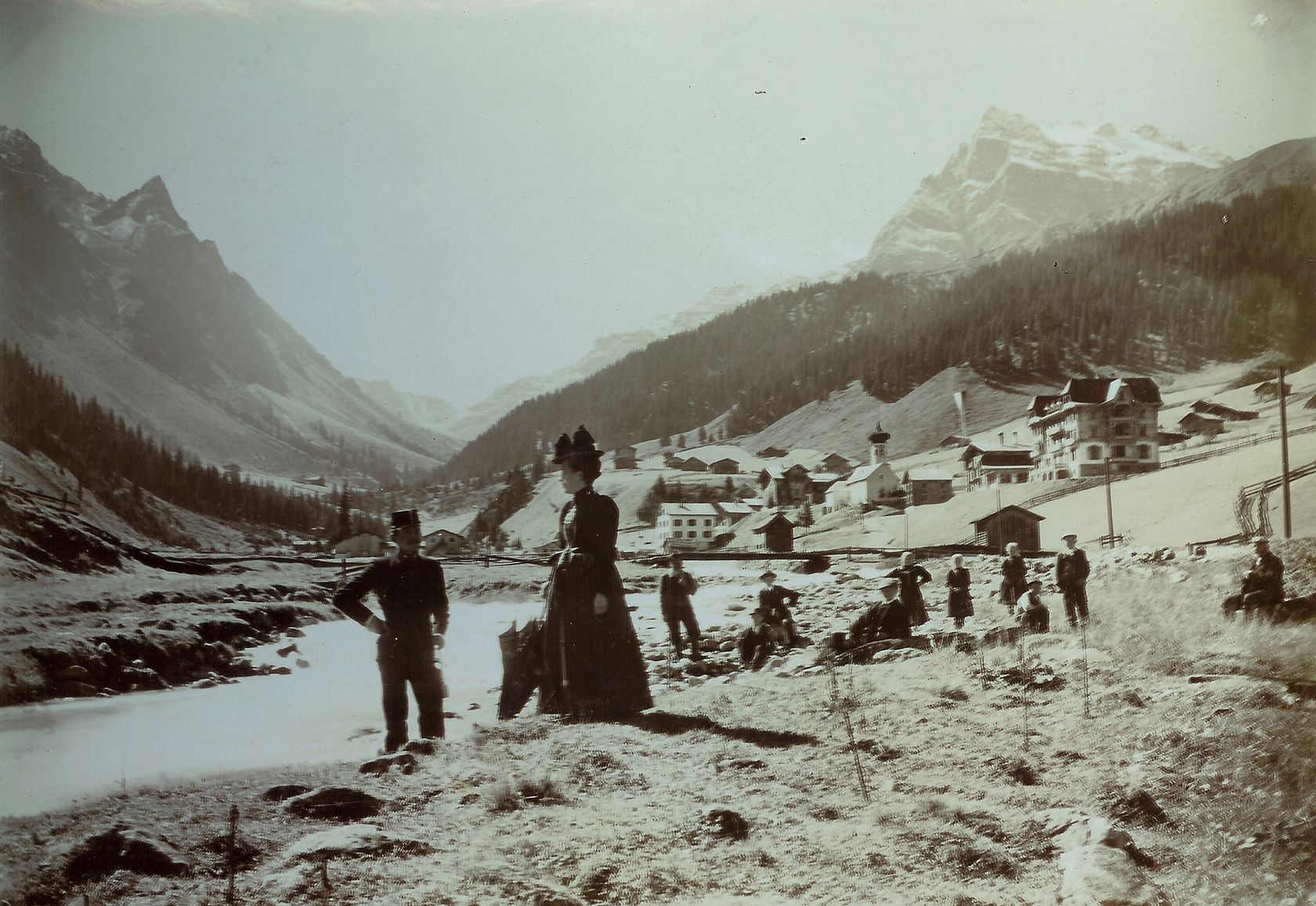 In 1904, the Hotel Madrisa received its first visitors in winter around Christmas. A “winter season” was, however, by no means implied. These first guests were ski tourers, many among them international sportspeople. 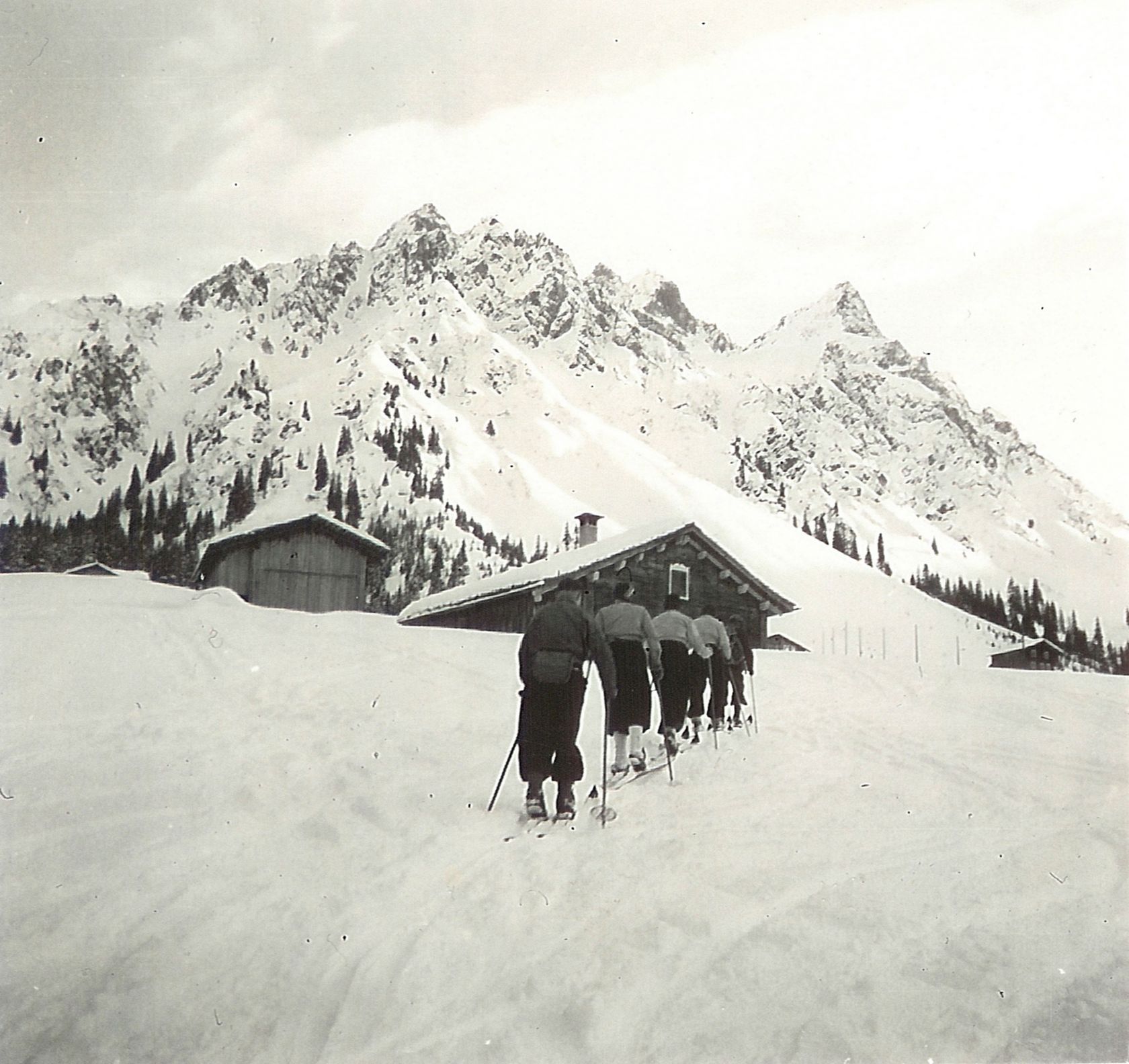 From then on, hotel Madrisa stayed open throughout winter as well. Alpine pioneers such as Walther Flaig and Viktor Sohm offered the first ski courses. In the 1920s, Bertram Rhomberg hired the renowned skiing pioneer, colonel Bilgeri, for deep snow and off-piste skiing courses. On behalf of hotel Madrisa, Walther Flaig published the tour guide “Skiing in Gargellen” in 1928. 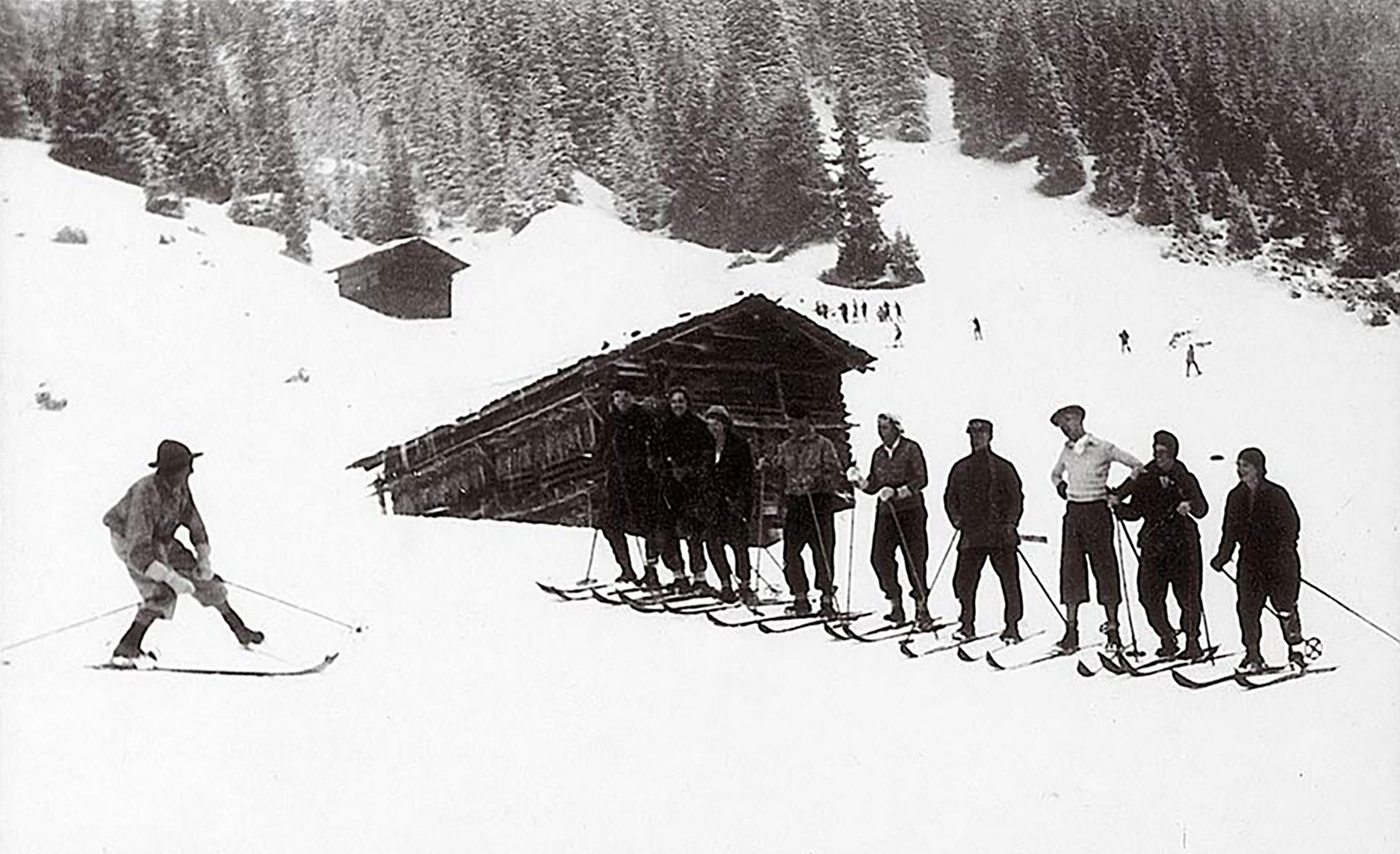 Privy councillor Mey from Würzburg took over the hotel. In 1929, he hired the internationally experienced hotelier Bertram Rhomberg from Dornbirn, who prior worked as director of popular hotels in Taormina, Nice, London and Southern Tyrol. One year later, Bertram Rhomberg acquired the hotel – and from then on, he became a hotelier with heart and soul. The globetrotter and professionally experienced Bertram Rhomberg brought prominent guests from all around the world to Gargellen, such as the manager of the German Archaeological Institute in Constantinople or the German publisher Brockhaus. During the times of the “1000-Mark-ban” by Hitler, when German guests were absent, governors of Malta and Tanganyika and the personal physician of the Dutch Queen stayed at the Madrisa. 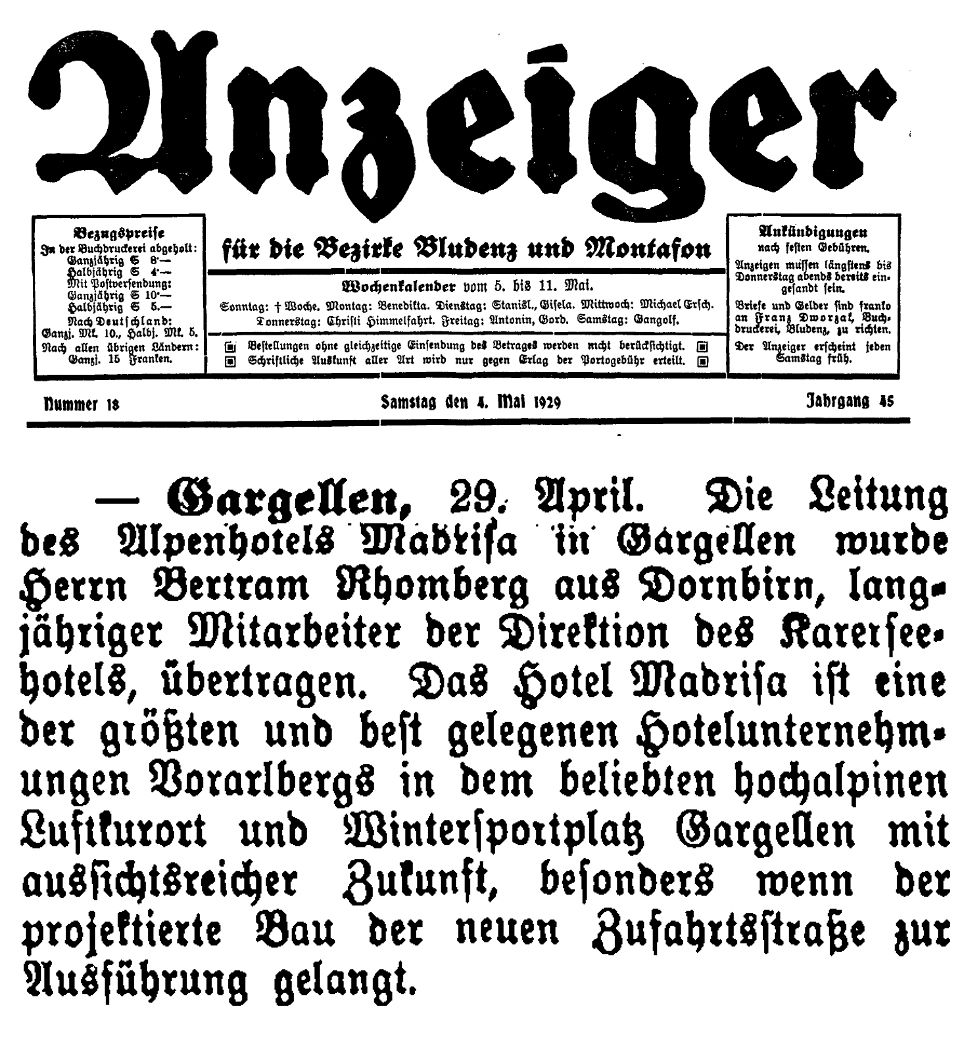 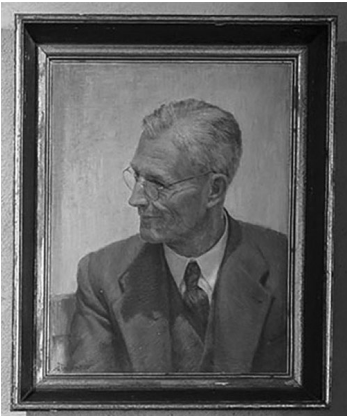 “Idealism is part of my profession; and material benefits must not always be the priority. I do not make high demands on life and am completely taken up with my profession, when I can perform work as I see fit.”

The lack of a proper road was the biggest challenge for Bertram Rhomberg. In archives, Gargellen is referred to as “a palace accessed by a chicken ladder”. The old road led to the Maisäß hut Rüti and the Platina-Stutz. For cars and horse carriages, this road to Gargellen was difficult to manage. It was only as of 1932 that snowmobiles equipped with runners and groomers could transport guests to Gargellen. Soon after, postbusses too managed to navigate that “road” in summer. However, it resembled more a trade trail than the roads as we know them today. 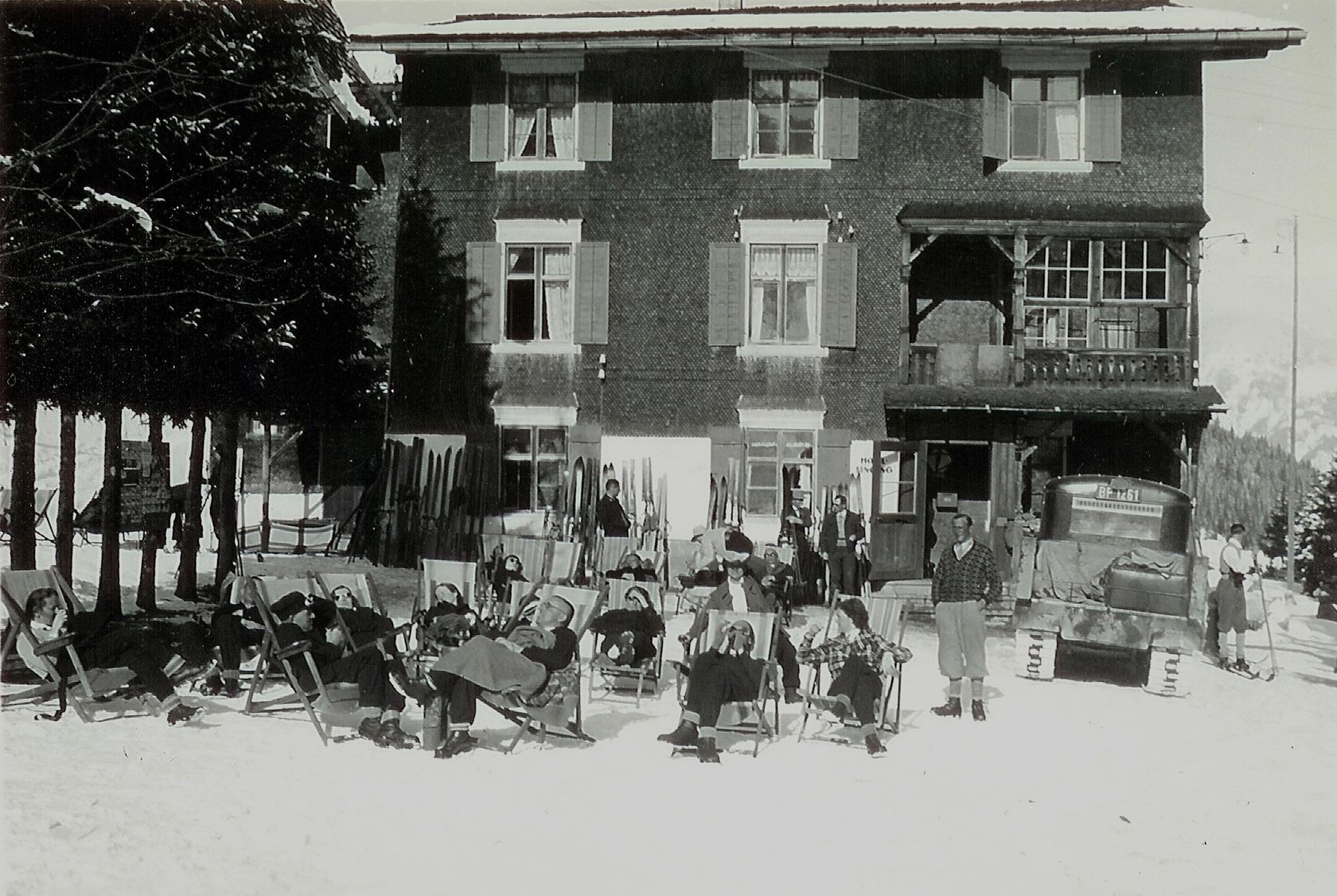 An important moment in the hotel’s history was the marriage of Midy Karl and Bertram Rhomberg in 1933. Together, they led the hotel through the crisis of the “1000-Mark-ban” and the years of war – including the forced quartering, border protections, children’s evacuation programmes and the period of occupation. The Gargellen mountains played a significant role: From 1938 to 1945, they served as a border between the “German Reich” and Switzerland. This border, running from the mountain ridge of the Rätikon to the Silvretta was not accessible by road or any official border crossing. Due to its remote location at the end of the valley, it became the destination of numerous people seeking refuge from national-socialist persecution and annihilation. Here, at the border to neutral Switzerland, dictatorship ended and freedom began. Not all succeeded to escape. 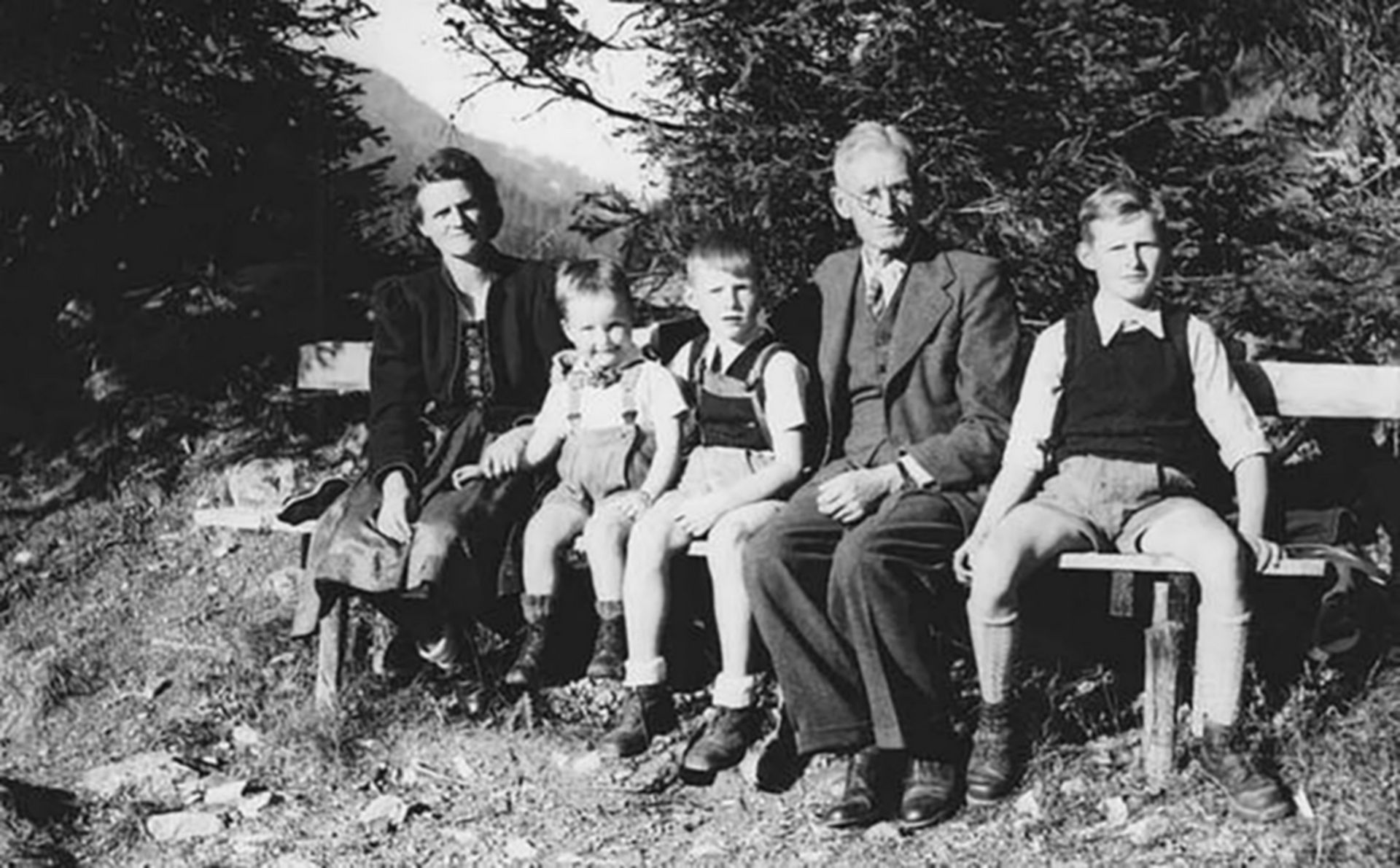 After the early death of her husband, Midy Rhomberg solely led the hotel as of 1947. Despite several tragic blows, she believed in the future of the hotel and Gargellen. She loved the people, was determined and innovative and significantly shaped the family’s history in the hotel and the village in the upcoming decades. In 1949, she built the first drag lift in Gargellen and was a founding member of the Gargellen cableway. Midy Rhomberg expanded the food stall and opened a sports shop. She established the hotel’s own orchestra, renovated the hotel and with that its prestige. 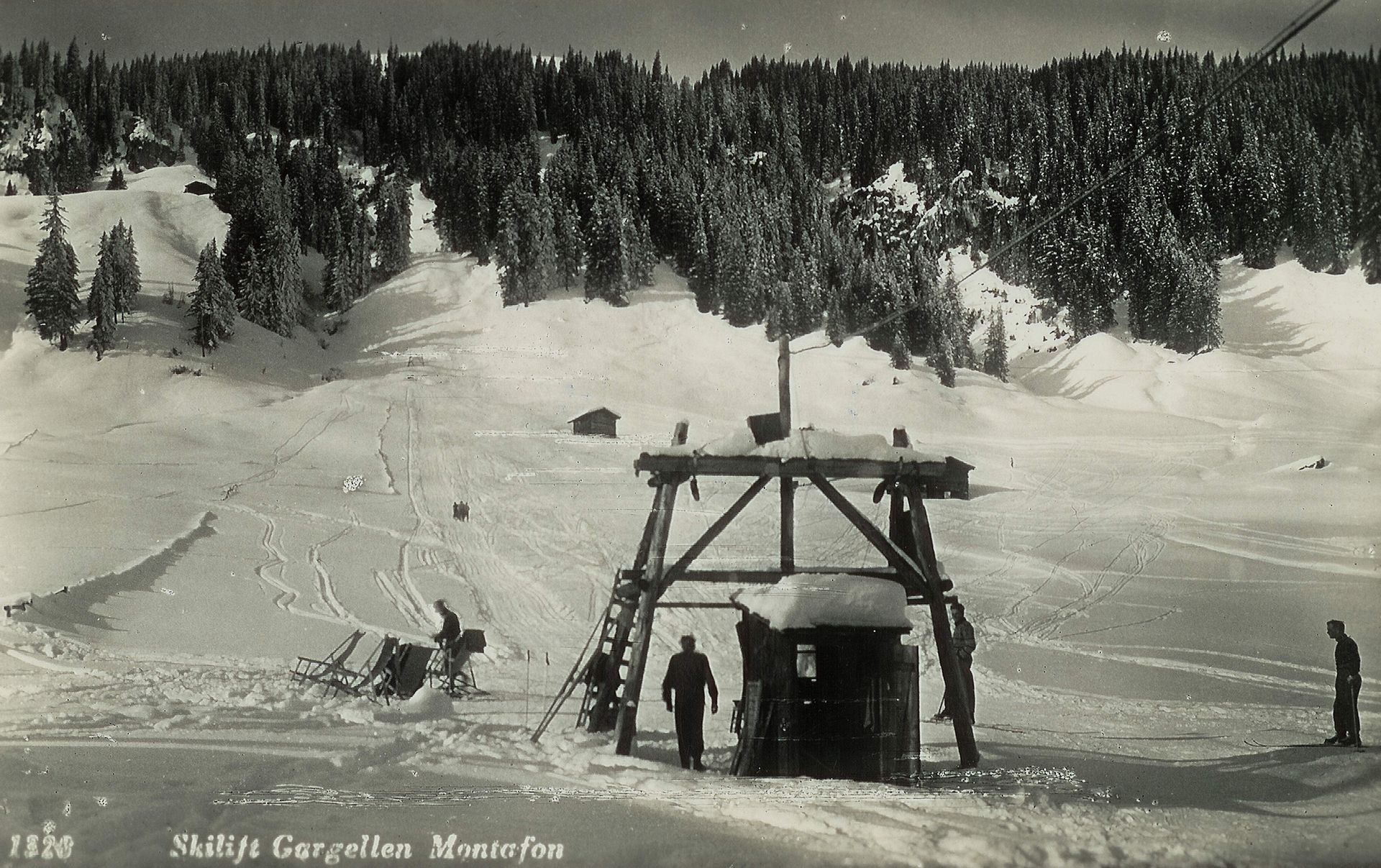 Midy Rhomberg’s love for literature brought her long-standing friendships with writers, who became regular guests at the hotel Madrisa. Alpine writers Walther and Hermine Flaig and lyric poet Natalie Beer worked during their longer stays at the hotel and researched for their works. Hedy Rothert, a writer from Rhine valley, was Midy Rhomberg’s best friend. Thus were created stories, poetry and hiking guides with Gargellen-specific local colour. 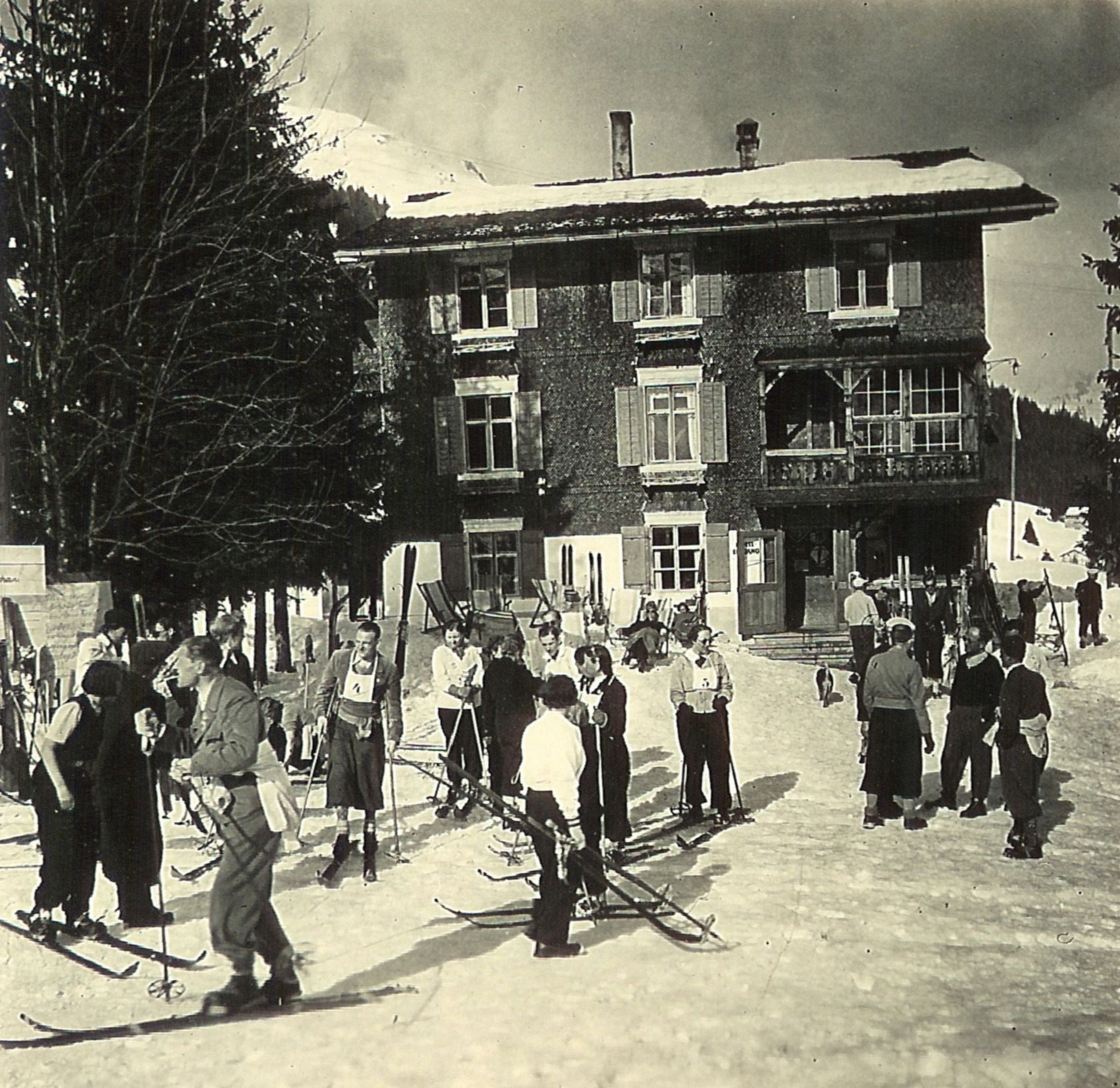 At hotel Madrisa, the generations have changed: Hans-Karl Rhomberg continued his mother’s efforts for the village and the region. Together with his wife Lilly Rhomberg, he expanded and modernised the hotel. Thanks to her remarkable sense, Lilly Rhomberg managed to hire the best architects for the renovation. In 1970, the spacious indoor pool and spa were built. Ten years later, the southwestern tract was built, including the reception, bar, Montafon lounge, comfortable rooms and a discotheque. Only the beautiful Art Nouveau tract from the turn of the century remained unchanged. With courage and great determination, Lilly and Hans-Karl Rhomberg secured the hotel’s future and positioned it as an internationally renowned hotel in the Austrian alps. Before Bertram Rhomberg jun. took over the hotel management from his parents, he re-opened the hotel’s own farm, which was closed in the 1960s. 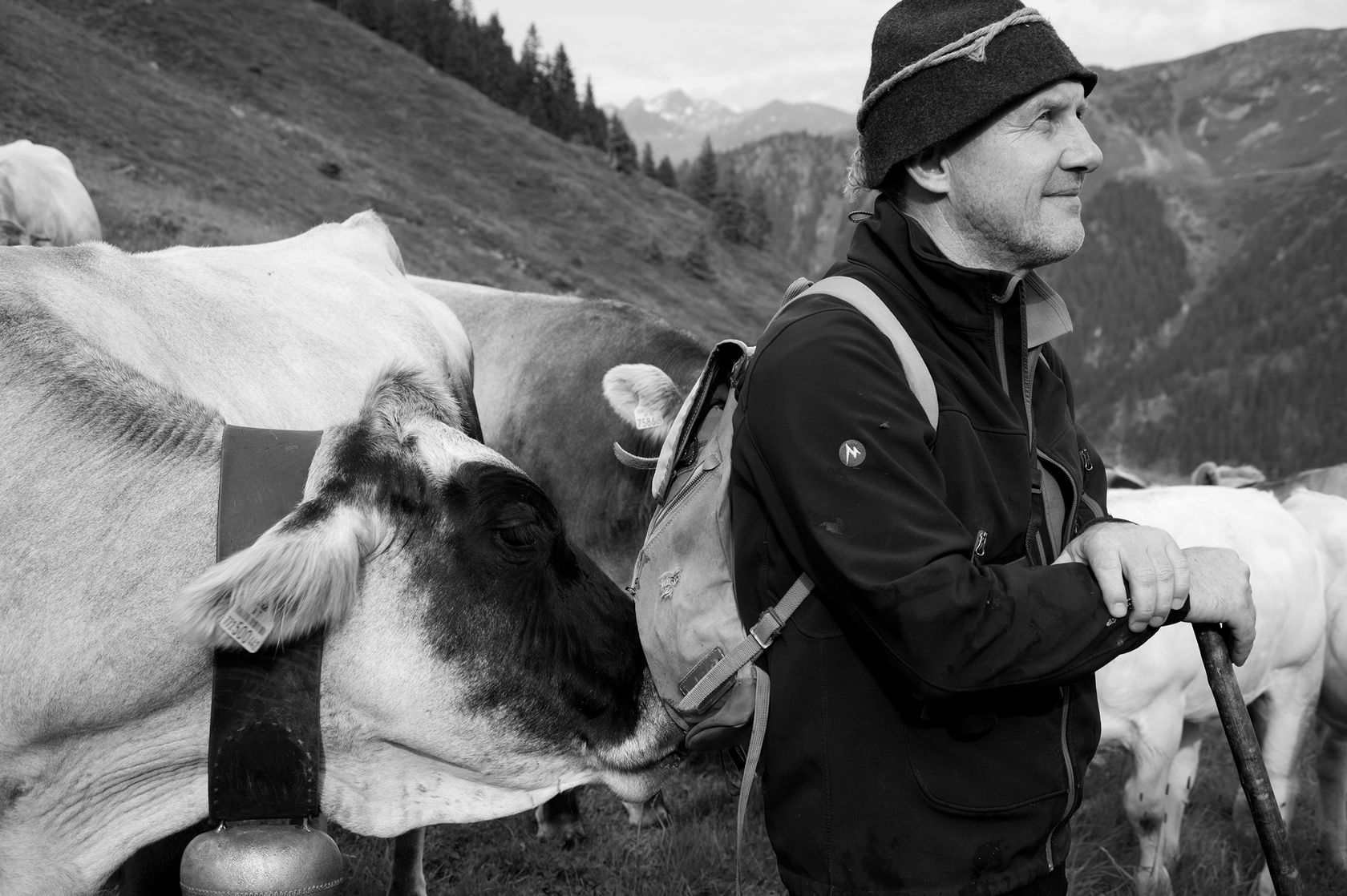 The generations changed again – in harmonious relationship. Lilly and Hans-Karl Rhomberg supported Bertram and his wife Monika Rhomberg, who continued the hotel management.

Bertram and Monika Rhomberg consistently implemented sustainability as a factor in all areas of the hotel. They changed the heating system to renewable energy sources. In proper style, they renovated several rooms in the Art Nouveau tract as well as the staff house built by Franz Xaver Schwarzhans in 1892. Bertram Rhomberg was particularly committed to actively support the theatre play “Auf der Flucht” (“On the run”) by the “teatro caprile”, which deals with the history of Gargellen and his grandparents during World War II.

In 2017, Bertram Rhomberg died in a tragic accident while clearing an alpine road from snow. Supported by her parents-in-law, Monika Rhomberg continues to lead the hotel as well as the renovations and modernising measures that she started with her husband. Their daughter, Johanna Rhomberg, supports her mother and also took over the organic farm work from her father. She is the youngest farmer in Montafon, while her brother Adrian Rhomberg is completing his studies in economics in the USA and Paul is finishing hotel management school in Salzburg. 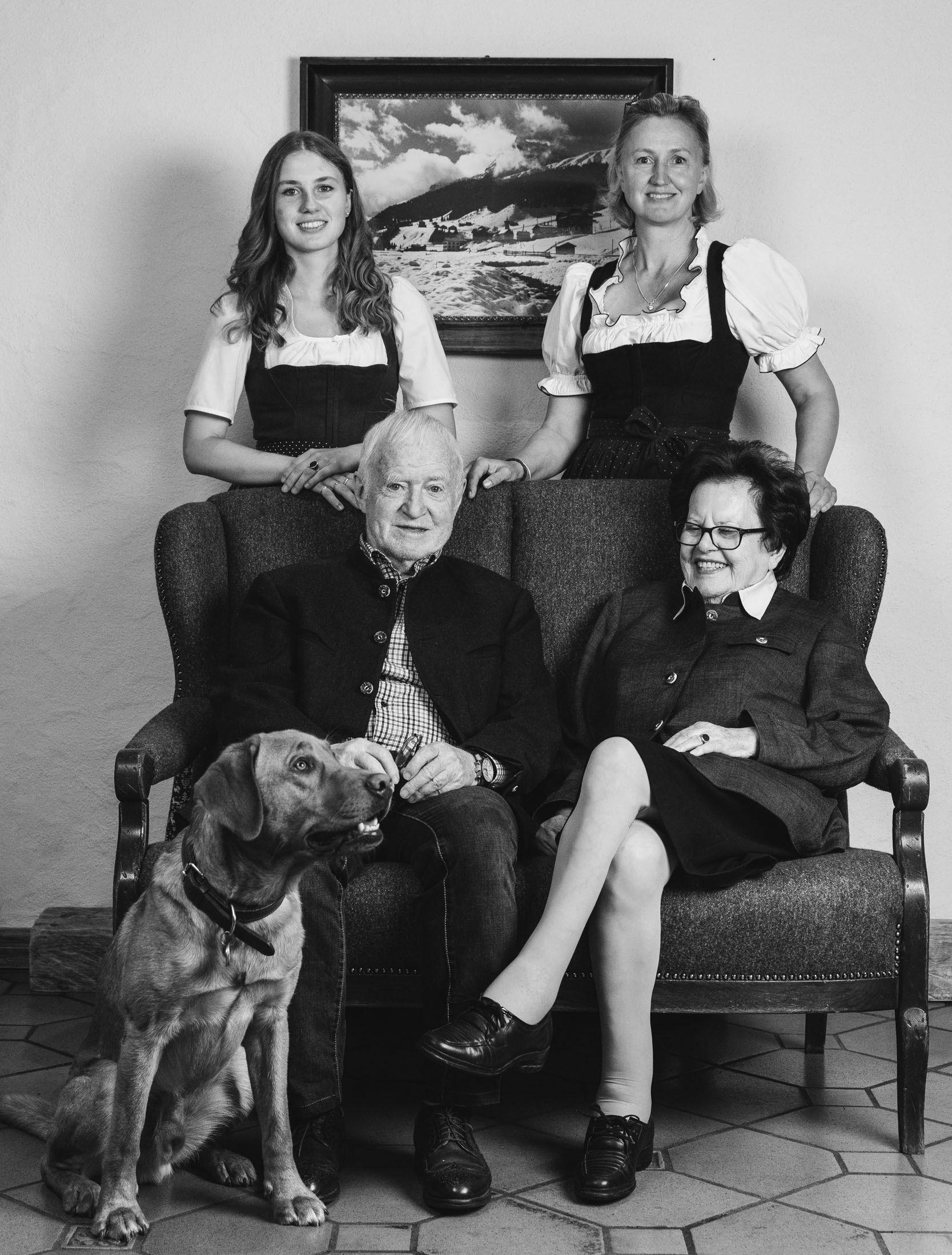